Dress Up Your Furriest Friends for Halloween 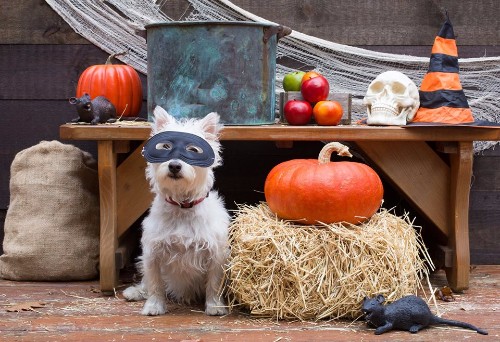 How’s your Halloween planning going so far? If you can believe it, only a matter of weeks stand between you and one of the spookiest – and most entertaining – nights of the year! As for me, I’m still in the idea stage of my costume and décor planning (I’d better get moving!), so I’ve been spending some time lately brainstorming ideas (read: Googling). 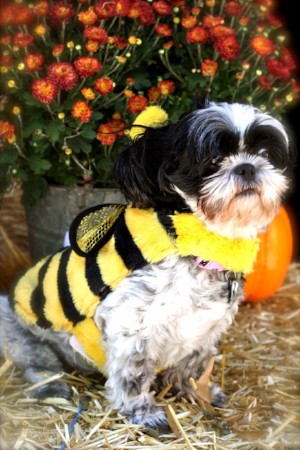 Today I was poking around Goodwill Industries of Delaware and Delaware County (Wilmington)’s Facebook page when I saw the adorable Halloween display, complete with cute pup, pictured above! That got me thinking – why have I never considered searching for pet costumes at Goodwill before? Lots of people dress up their pets for Halloween, but for some reason I had never thought to do so myself! Maybe I didn’t peg my two cats as the most adventurous trendsetters, but I do love the thought of really getting into this fun-filled holiday and helping my neighbors all at the same time and since Goodwill’s mission is to assist those in need, they make that really simple. You can join Goodwill in giving back to your community, too!

After seeing that display, my imagination started to run away with me. In just a few minutes, my furious online search had turned up tons of results for creative pet costumes that other people completed, most of which could be tracked down at Goodwill! I found this little bumblebee on Goodwill Industries of Monocacy Valley (Frederick)’s DIY Goodwill Halloween Pinterest board and it had me nearly doubled over in a fit of giggles. Not only is this pup costume pleasant and playful, but if you live in a cooler region like I do, it’s practical, too. Dressing up will help insulate a cold canine while out on the prowl for tricks and treats! 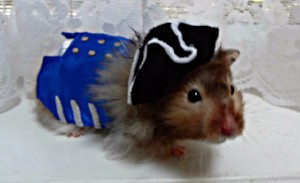 With a bevy of clothing options available for the large and the very, very small, Goodwill can help you outfit even your littlest family members this fall. Check out this hamster donning pirate dress on the blog Love of White! This tiny guy’s owner even found a pirate ship toy at her local Goodwill to accompany the costume. Props definitely help make costumes more recognizable, so if you aren’t sure whether people will “get” your pet’s (or your) attire this year on All Hallows Eve, think about what you could add as a prop to make it clearer. Then hit the thrift store so you don’t have to pay full price for something that’s only being used once.

Do you dress your pets up for Halloween? I’d love to hear your most creative costume ideas! Maybe someone out there has even worked with their animals to bring a couple’s or group costume to life. Let’s see those furry friends!